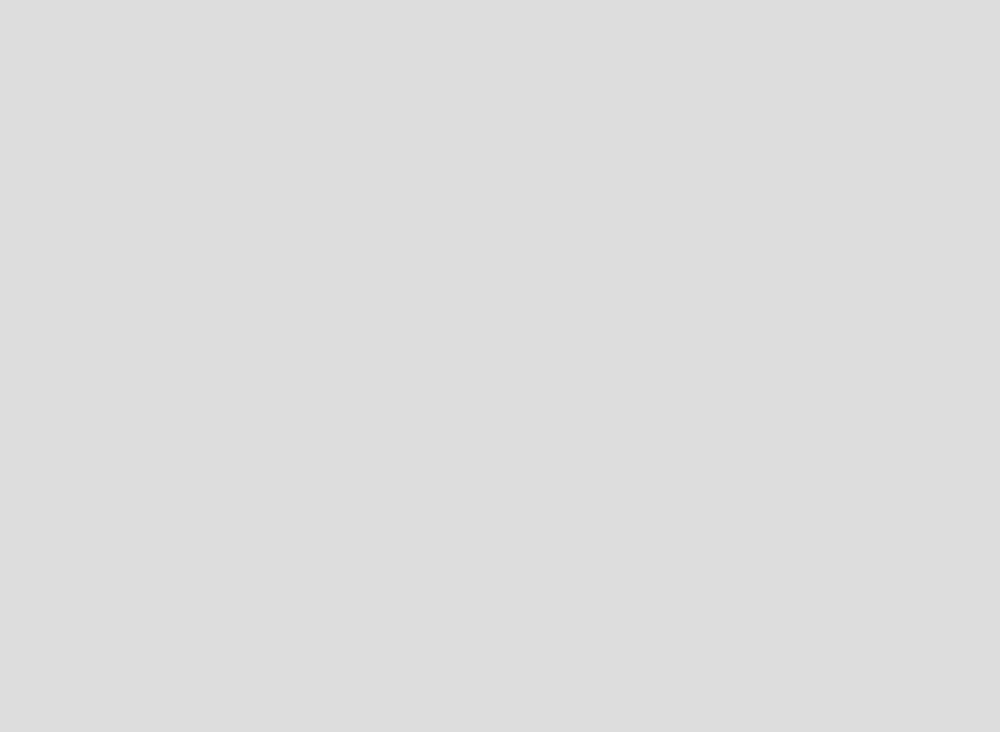 On the quiet East Side Square in downtown Huntsville, the law firm of McDaniel & McDaniel casts a shadow where the former Huntsville Inn once stood. Many noteworthy events took place at the popular hotel of yesteryear, but none so well recorded as the visit of President James Monroe in the summer of 1819.

The visit’s significance, extensively quoted in the daily papers of the time, was something everyone in the village of Huntsville understood. Even today, visitors can scan the historical marker placed at the site in 1965 that reads:

“Here, President James Monroe was honored at a public dinner on June 2, 1819, while on a three-day visit to the Alabama Territory. Here, also, the First Alabama Legislature convened on October 25, 1819, while Huntsville was the first Capital. 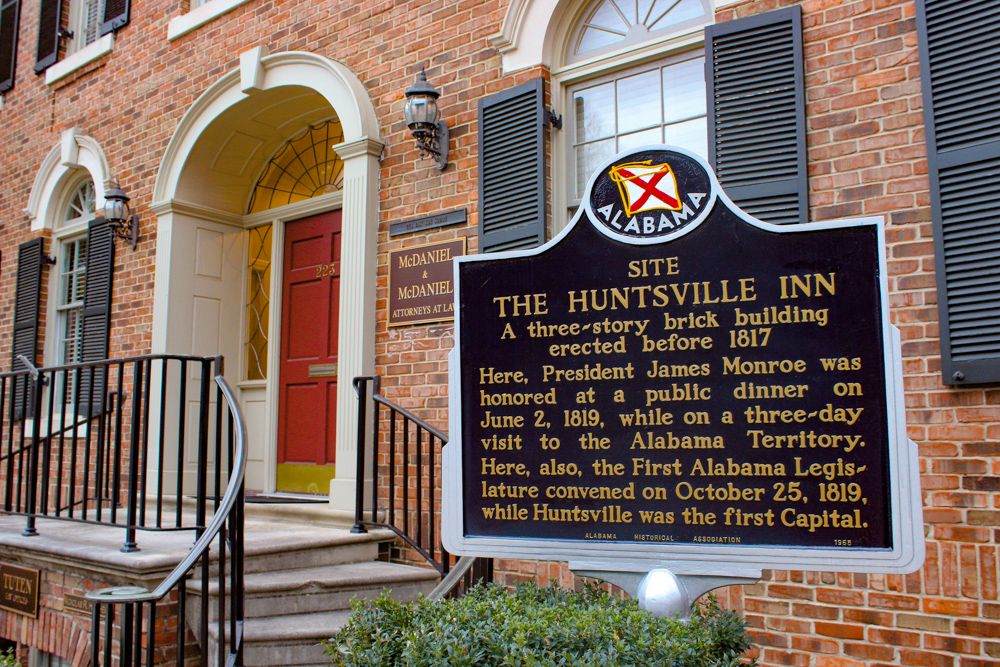 But hidden behind its lavish parties and evenings with honored guests was a rocky real estate transaction that had Irby Jones, owner of the Inn for several years, struggling to pay his debt on the property. The Huntsville Inn was passed to several different hands through Deeds of Trusts that eventually led to dwindling popularity of the once lively hotel.

A Look Inside The Huntsville Inn

According to The Historic Huntsville Quarterly, the inns of the early 1800s were vastly different than the modern accommodations we are used to. Many were small in size and had only one room that could be used for socializing, dining, and events. The larger inns and taverns, however, offered more when it came to contemporary comforts—including access to a stout drink or an elegant ballroom filled with dancing and entertainment.

Usually, a stable was provided where weary horses could rest and stay warm through the night, and space for carriages was always close by. Such was the case at The Huntsville Inn.

It was a three-story structure, which made it taller than many buildings in the surrounding area. Outside, in a separate building, the kitchen was located to the south side of the Inn. (See image below. Building 33 is the Inn and 33A is the detached kitchen.)

Much of what we know about the Inn comes from records of a traveling journalist, Anne Royall, who wrote many complimentary letters from The Huntsville Inn about her stay.

She recorded that her evenings were filled with music when she left her room and descended to the main parlor. A site for musicians, traveling performers, and extravagant political gatherings, The Huntsville Inn was a well-known site to every citizen. From dancing classes in the ballroom to piano concerts in the parlor, the Inn reflected the interests and simplicity of the early 1800s.

There are even records of lectures given at the Inn about various scientific discoveries of the day, including subjects like the “discovery, nature, and properties of Hydrogen Gas” in which the topic of spontaneous human combustion was addressed at length.

In later years, Irby Jones added a coffee house to the property where guests could enjoy cakes, soda water, coffee, and ice cream. He also included a Reading Room for men where they would be served cold cuts, hot coffee, tea, and other beverages.

A Deed of Trust from November 1821, recorded in The Historic Huntsville Quarterly, describes some of the inventory within the hotel that gives us a vague idea of what the interior might have looked like.

Perhaps its cozy accommodations and ample amenities was the reason the property was the place to be during its heyday. 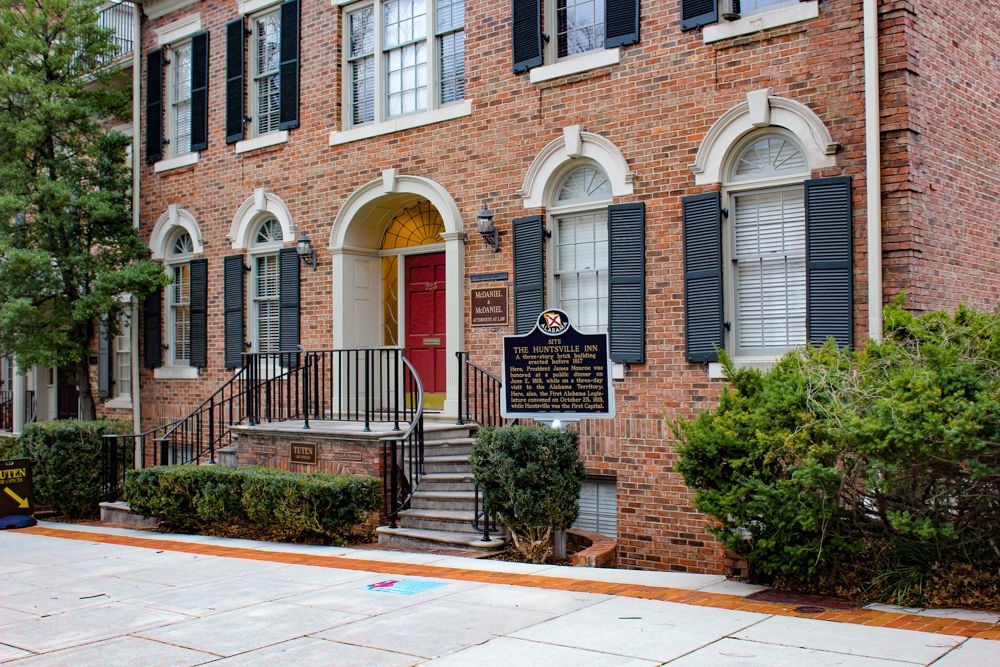 Transactions of the Alabama Historical Society, Volume III outlines the reasons behind President Monroe’s visit as well as what happened once he arrived at The Huntsville Inn.

During a tour of the South, he passed through Huntsville on his quest to “examine the situation of the fortifications” and to stimulate patriotic spirit while “popularizing his administration.”

Upon his arrival, the whole town was determined to show him hospitality. The Alabama Republican issued Saturday, June 5, 1819 states:

“On Tuesday last the President of the United States with Mr. Governeur his private Secretary and Lieut. Monroe of the Army, very unexpectedly arrived in Huntsville, and put up at the Inn. No intimation of his intention to visit our town had been received by any individual in it; but the citizens solicitous to show their respect to the Chief Magistrate of the Union, appointed a committee to wait upon his Excellency and invite him to a public dinner on which occasion C.C. Clay, Esq., addressed him…”

C.C. Clay, Esq., thanked the President for his visit to the “remote and humble” village of Huntsville and assured him of the many feelings of national pride that stirred throughout the city. He then invited him to a formal dinner that would welcome proper dignitaries and serve an exquisite menu in his honor.

It’s interesting to note that the article does not state where the banquet took place, although some suspect it was at Walker Allen’s Cabinet Shop, which served as a hall for the Constitutional Convention then in session.

However, Irby Jones had ownership of various Huntsville properties in addition to The Huntsville Inn. This led some to believe that he gathered chairs, tables, and tableware from his other establishments, like the nearby Bell Tavern, in order to accommodate the feast at The Huntsville Inn. It was estimated that the Inn could welcome 100 diners within its walls.

Regardless of where they wined and dined, the President accepted and a fine banquet ensued.

After his visit to Huntsville, Monroe headed to Nashville on the next leg of his journey. But he didn’t leave without making a few new friends. In fact, many of them escorted him on horseback several miles of the way while exchanging stories and laughs.

It’s estimated that the original inn was constructed around 1815 or 1816 because it was already a working inn when LeRoy Pope sold most of the block in 1817 for $4,500, which included the Inn.

In 1819, the Talbot’s Inn was renamed The Huntsville Inn, and that same year Irby Jones became the owner of the property for which he paid $27,000. He would soon experience difficulties in paying down his debt beyond anything he’d expected.

In an attempt to have his patrons pay off their charges, Irby placed notices in The Alabama Republican in 1820 requesting payments for accounts at The Huntsville Inn and The Bell Tavern. Still, he was unable to make a dent.

During his time as owner, Irby Jones tried everything to pay off debt, including a lottery in which The Huntsville Inn was offered as a $30,000 prize. Ultimately, the $10 lottery tickets did not sell well. The contest was canceled and the participants were refunded. It seemed that Mr. Jones would always be tied to his debt.

Even his close family members, some of which he owed money to, didn’t have faith in Irby’s endeavors. Irby was always indebted to his brother Edwin. In the end, their father Nathan left Irby’s share of his inheritance to Edwin in order to make up for his $7,785 loss.

Although Mr. Jones worked with several creditors with the hope of paying off the property, it was ultimately sold at a court-ordered public auction in 1824. Judge William Smith purchased it for a mere $3,200, even though it was completely uninsured. (A factor that later caught up with him.)

Ending In a Fire

As was the fate of many inns and taverns of the day, a disastrous fire ultimately claimed The Huntsville Inn in 1835.

“Disastrous fire. It is our painful duty to record the occurrence of the most disastrous conflagrations with which our village has ever been visited. On Saturday evening, a few minutes after 7 o’clock, a fire broke out…”

Judge William Smith, who had possession of the Inn, was mentioned in the article.

The uninsured building and nearby properties on the block estimated a loss that exceeded $100,000. 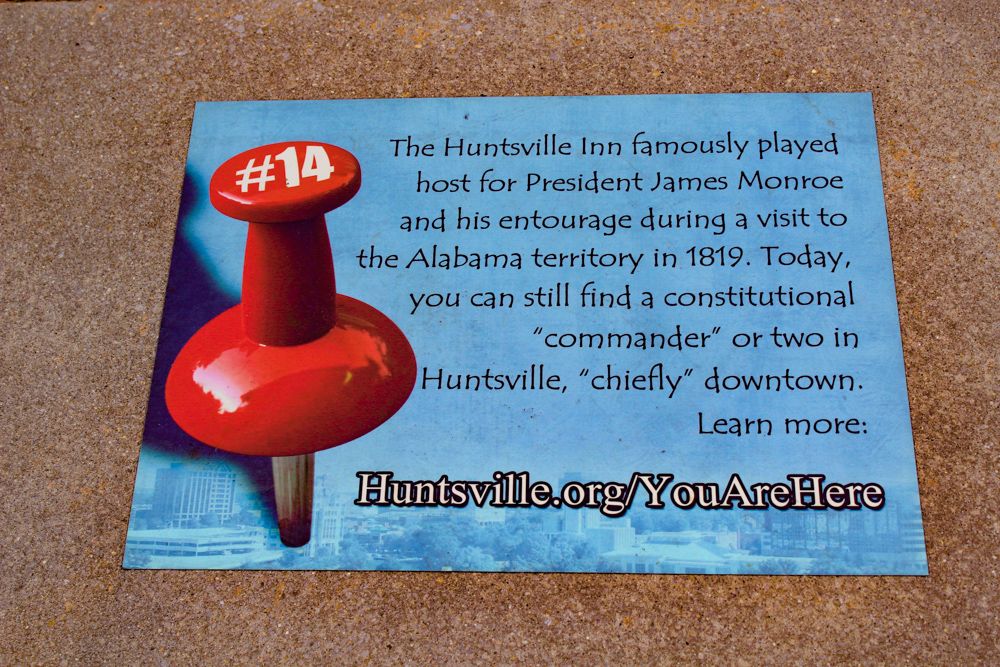 Now, 200 years after the President’s visit, the site has a new building in its place. But it still remains a beautiful reminder of the city’s humble and interesting past.

Downtown’s landscape has changed drastically over the years. But our appreciation of history helps keep our stories alive.

Next time you are standing at 223 East Side Square, take a moment to remember the Inn that once stood there, the parties that took place, and the memories that still linger.

Thank you to the Huntsville Public Library for help in researching this article.

Do you know more about this property? Be sure to email us at info@crunkletonassociates.com.